So last night I went to a country music concert. Um, yeah.

Just thought I’d get that out there to scare away the weak of heart, since that’s not really the beginning of the story.

So I went clothing shopping yesterday. I need a suit, now that my weight is stabilizing. I also need business casual clothing. Shopping was… interesting. It was as difficult as usual to find clothing that fit well (“Big legs and no ass?! What kind of a freak are you?”), but I managed, I think. I don’t like the suit jacket I got, I don’t think, but it should be workable. I may also take it back and find another jacket by the same brand (and matching fabrics and all that mess) that looks better.

I even (drum-roll, please) bought clothing that could be described as “cute”. Or sexy, one of the two, depending on if you’re my mother or a friend.

The interesting dilemma there is that I didn’t take anyone with me. So, honestly, I have no idea if the suit I bought looks decent. But I also had the guts to buy what I’ll [jokingly] call a Bridget-shirt or two, which I wouldn’t have if someone were with me.

So after my hurried shopping, I went for a hurried workout, and had just gotten out of the shower when Luke called and told me I had ten minutes to be ready. Oh-kay.

I dressed, etc., just in time, and got to meet Luke’s little brother and friend, and to re-meet Mr. S. Interesting folk. Fun. I was thrown completely for a loop when Mr. S picked on me at dinner (and later). Then again, Luke had to get it from somewhere, and it can’t all come from his mother, right?

Luke’s brother J. looks very little like Luke, with the exception of their eyes. When animated, J. is a lot of fun and is disturbingly attractive (he’s my friend’s brother–that’s just creepy; *shudder*). I’ll chalk that up to the Stetson and the accent, to spare some bruising of my ego. I’m such a sucker.

If you watch him (or Luke, for that matter) when he’s not involved in what’s going on around him, though… it’s interesting. I’ll leave it at that, but I wonder where they get it from, because Mr. S didn’t seem to be like they were in that respect. Could be that he was just less likely to lapse in attention than they were at the dinner, so I didn’t notice.

It’s one of those things that I’ve noticed has lead me to attempt to keep people like them animated. If attention is wandering, time for a poke or a question or to say something shocking. An interesting trend on my part. Now, if I can get away with it–which I couldn’t last night because of company–I’ll just sit and watch, because damn if I can figure out if they’re even thinking, much less what could be going through their heads. I’m fairly certain that when I zone out I’m almost always following a train of thought, at least. Not so sure about those two. They could just be more subtle than I am (like that would be a feat); I think my eyes dart around.

At any rate, we went to dinner, where I picked around meaty food and tried to seem like I knew what a civilized conversation was. There were two other Rose folks I knew there, and I have to admit I was pleased we weren’t sitting near them–the stress would have been unbearable, and I was already distinctly unrelaxed all evening.

J., the friend, and I headed out early for the concert, which was a short walk away from the location of the dinner. We secured our seats (apparently country music concert goers actually notice and make use of their seats. Heh.) I joked around with J. a little–funny, funny guy–and watched the opening act of the show. Hell if I can remember their names, but I liked one of the guys–I think it was James Otto, because I thought they were talking about cars, at first. Then came Gretchen Wilson; I’m not such a fan of her music. “Whee, I’m a redneck”? Maybe I’m value-loading that term because of my fun in rural Texas, but when I think “redneck”, I want to make sure I have some sort of sharp cutting implement on me or within easy reach with which to defend myself.

So I endured her set.

Then came Big and Rich. Good music, for the most part; I like their slower, more thoughtful songs, and they were trying to keep the party going, which rather contrasts. The set devolved into a MusikMafia jam session, which was a little unorganized for my tastes.

So in comparison to the Korn concert and the Tool concert I’ve attended? There was a lot of the fun-element of the Korn concert. Improv and chit-chat and crowd interaction and general fun. But there was also the crowd-calmness (but nowhere near the intensity–for me, at least) of the Tool concert. No real wildness; it was about feeling the music rather than being particularly [and violently] social; people sat down in their assigned seats, if they were so inclined, clapped along, and listened to the music. Tool, of course, wins, because their music can very easily incite me to tears, and I danced at their concert like nobody was watching.

There was also the fact that the crowd at the concert last night was very much not my usual crowd. Some social awkwardness, there. Quite a bit, actually, and I thought I was better than to let that bother me. Guess not, to a certain extent.

I don’t think the “whee, I’m a redneck” sentiment helped that much, though. See above about being distinctly unrelaxed all evening.

Following the concert, we snagged some pizza and headed back to Luke’s, where I scared the shit out of Dr. 7 by alerting him to our presence. He did deign to join us, however, which I wasn’t expecting.

J. made the mistake of asking if Dr. 7 was pleased about the results of the election, which sent me into giggles because Dr. 7 is a staunch Democrat Bush-hater and looked like he was going to commit homicide Tuesday night (morning?) when Ohio (his home state) went Red. Well, that and the fact that I have yet to reveal who I voted for, although I am actively and thoughtfully following as much of the post-election fall-out (from all sides) as I reasonably can. I find posts like Cecily’s and Michelle’s and Jenny’s interesting reads (although “interesting” is a decidedly bland word to use there, methinks). The Open Letter to the Democratic Party (link courtesy Luke and Instapundit) and others like it from both sides are equally good reads.

After pizza and a bit of chit-chat–and one almost-succeeded attempt to embarrass Luke–I got a ride home from Mr. S and hit the sack. A fun and interesting day overall. Much food for thought.

Update: I almost forgot the picture! Fuzzy as hell (the camera is set to focus on the occupant of the computer), and unfortunately, I’m in it, but the bloke on the left is J. and other other is his friend. I feel sorry for Luke and Co., because they were due to be up before 08:00 this morning (not that I wasn’t, but it seems like guys have serious trouble with this). 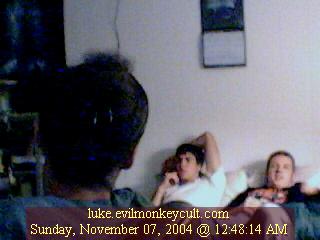 8 thoughts on “Concert’ing and more”