So we’ve been working on Exploit: Zero Day for a couple of years now, but I haven’t talked nearly enough about it here. It’s a web-based cyberthriller puzzle game where you play as a hacktivist, uncovering and battling against oppression and exploitation.

*innocent whistle* Totally not the sort of game I’d want to make or play, no…

It’s been in closed alpha for a while, but we’re ready to offer a prelude season of paid story: “Headless Swarm”. For details on the plotline and how it relates to the continued free alpha access, check out the announcement blog post over at FPG.

END_OF_DOCUMENT_TOKEN_TO_BE_REPLACED

5 Things I Learned as the Internet’s Most Hated Person | Cracked.com
"I watched every avenue of social media suddenly blow up with messages of abject hatred from thousands of strangers. For the first five days, I couldn't sleep. Every time I would start to doze off, I'd be shocked awake from half-asleep nightmares about everyone I love buying into the mob's bullshit and abandoning me. The ceaseless barrage of random people sending you disgusting shit is initially impossible to drown out — it was constant, loud, and it became my life."
They Are Not Trolls. They Are Men. | Make Me a Sammich
"By calling these people “trolls,” we are basically letting them off the hook. It’s a lot like the “boys will be boys” mentality that helps to keep rape culture thriving, but it’s also different, because boys are expected to be human. By calling these people “trolls,” we relegate them to non-human status, and we make it clear that we don’t expect them to live up to the same behavioral standards as human beings." END_OF_DOCUMENT_TOKEN_TO_BE_REPLACED 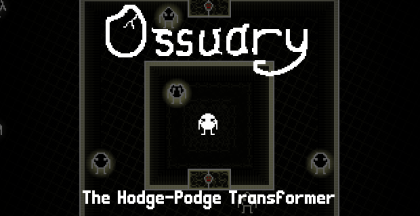 I promise, not every one of my blog posts from now on is going to be about Future Proof, but we’ve released a small companion game/prelude/demo to Ossuary!

Go play “The Hodge-Podge Transformer” while you wait for me to post some Iceland photos.

…Yeah, I said it. What, then? You’ve already waited 4 months; what’s one more day?