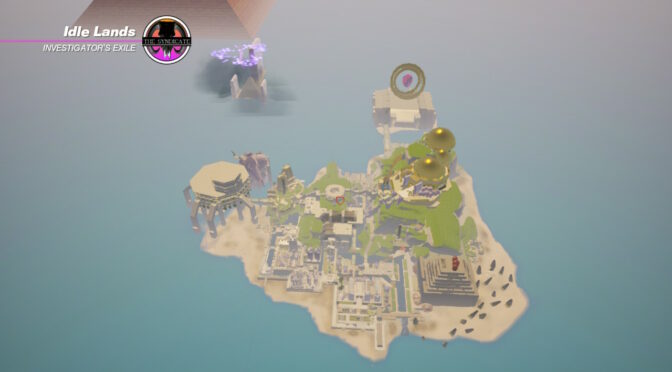 There’s a certain kind of game that I’ve become very into in the last few years. These are games that are investigative or explorations of knowledge and that bring one or two important things to the table:

The first gets me to play a game with gusto. The second makes the game perfect.

Paradise Killer is an outstanding game by Kaizen Game Works in which you play Lady Loves Dies, a disgraced immortal investigator let out of prison to determine who murdered the head of an immortal broken-ass oligarchy running a broken-ass pocket universe society in which humans are abducted from the real world and used as fodder to attempt to resurrect their old gods.

It’s one of my favorite games, period.

Much like the islands in the game, however, it is not perfect.

Beware, all ye who enter. Spoilers lie ahead, and this is a game with some real good revelations in it as you play. This doesn’t include anything from the 2022 expansion, which I haven’t played yet.

Quick summary of the relevant setting aspects: the island on which the game takes place is the 24th iteration of these pocket universes, each crafted by an Architect who is a member of the Syndicate and built using the souls of the ritually massacred humans they’ve abducted. Each island is designed to be “perfect” in order to lure their gods back. Every island ends in demonic possession instead. In the millenia these 24 islands have run, one single god has been reawakened.

The Syndicate has had some turnover. Notably, Lady Love Dies has been imprisoned for about 11 islands, and the current Architect is the child of the previous Architect(s). But the initial impression given is that this is largely a static (and stagnant) ruling body that is sorta going through the motions. Everyone has personality, and some have zeal, but their zeal is largely for their own position and identity, and how they can best embody or improve it.

I took a rather completionist approach in my first play of the game. I wanted to find every piece of evidence available, especially knowing that the game was going to let me craft what I deliver as the “truth” of the murder story when facing Judge. This meant that I went through just about every dialogue tree I thought could reveal information and improve relationships. It revealed a lot.

Lady Love Dies (LD), as someone who has been out of the loop for so many islands (3 million days, or 8 millenia), is a perfect character to play: she’s incredibly tied up in the singular identity of being The Investigator, but the islands have kept going just as badly without her as they did with her. They all end in demonic invasion/possession, including the invasion she was duped into letting happen. There’s a real sense of “omgbbq, I get to be relevant again! Let’s fix stuff!” running right alongside the, “oh, isn’t it nice that almost everything’s the same!” as LD scuttles back and forth across the island.

There are many places when LD and other characters—especially the human1 arrested for committing the murder!—reveal flaws in the system they’ve in. Grand Marshal Akiko 14, the brutally pragmatic head of the military, develops feelings for her soon-to-be-massacred human Marshals. Witness to the End, the extremely pious overseer of the final days of the islands2, is highly critical of the Syndicate, believing that they’ve lost sight of their real objectives. LD herself questions the amount of death involved in the iterations of islands, especially against the very poor success rate in reawakening gods.

Almost every character has a way to expose cracks in the system, and LD sponges them all up. The game does a pretty good job at not treating mere skepticism of the system as evidence that someone committed the murders in question. The murder plot is complex and involves some history. You can opt to play it simple for Judge if you want: toss the human up as the murderer, save the Syndicate from judgment. But if you dig in and stay curious, you will be on A Journey that leaves you with a smorgasboard of pieces to craft into a Truth.

It is very clear that the writer(s) of Paradise Killer see the flaws in this society. There’s never any doubt in playing that they know this society is fucked up. We are all on the same page, although there are some characters that worry about the possible collapse of the Syndicate.

But here’s where things begin to feel imperfect for me.

There is to some degree a sense that when you face Judge and craft a narrative for them of who did or did not conspire to commit murder and/or other bad deeds, you are helping deliver justice and change the Syndicate (and thus future islands) for the better.

That’s… not how systems work.

Setting about removing some dangerously ambitious people (some “bad apples”, we could say) does not change the system that let them have power in the first place. Ambition, secrecy, and murder are no more discouraged than they were before. Even in the day-to-day, it changes little: it does not let Akiko have her immortal Marshals to love (not that this is a good idea). It doesn’t actually get the Syndicate refocused on their weird and shitty goal. It doesn’t prevent them from using a large number of human souls to build Island 26 after Island 25 inevitably fails.

The devs and writers know this. Their shadowy Island 25 characters who are reflecting on what’s happening note that, “Solving a crime doesn’t mean the world is fixed.” Nonetheless, the staging and music of the trial is very triumphant and bombastic. LD is very much on her “The Investigator” bullshit, swept up in the moment of crafting narrative from her clever legwork of the preceding hours of gameplay. I felt it, too, honestly. I spent hours on a goddess-damned Switch Lite developing terrible de Quervain’s tenosynovitis playing this the first time in 2020. I was absolutely crunk to present my work.

The game does a solid job of letting you choose whether to let more minor “infractions” slide by without bringing them to Judge’s attention. Every one of those motherfuckers is up to something, and who cares that Lydia and Sam Day Break3 want to escape from this bullshit and might be former-assassinly enough to do it?

So after you present your case—and again, I presented the “complete” case, pointing the finger at the most actively-involved murderers in my first playthrough—and handle the executions, LD gets to move along to Island 25, recreating her demon-investigating Paradise Psycho Unit there.

Nothing changes. Not really.

Even within the context of the broken-ass system, there’s no revised plan to nab the gods, no plan to do differently by the humans. It’s just… Island 25 time. But it’s pretty cheerful about it. LD did her thing. She breathed life back into Paradise.

I don’t know exactly what I wish Paradise Killer did instead. At a minimum, I wish it was very blunt at how depressingly futile the continuation of the system is and that the investigation and trial were in many ways a farce.

Mostly I wish it offered up a way for LD and the remaining Syndicate members to actually break the system. I wanted LD to rise above her role and conditioning.

Unfortunately, Lady Love Dies is born of the system and steeped in the system. Her whole identity is granted and defined by the system, and she rejoices in returning to it. What did she do for 8.2 damn millenia in prison? Who could say. But “The Investigator is here” and is all too happy to be returning to gruntwork in time for the next island’s collapse.

(…Seriously, though: you should definitely play this game. It’s gorgeous, the music is outstanding, and the investigation is fun.)