Late in February, I decided to see if I alone could break Time Warner’s broadband internet monopoly in my area. I did so by checking out Clear, a 4G home internet provider.

In long, there was first…

There’s a kiosk in the lobby of one of Big Corp’s buildings downtown: 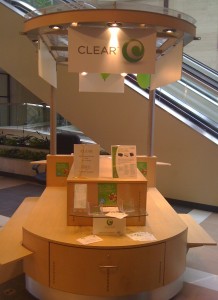 I swung by several times looking to talk to an agent, but it was never manned. I finally caved and emailed the agent, because their flyers mention a two-year contract, which is a no-go for me. I wanted to know what the prices were without the contract. I assumed they’d be higher.

When the agent called me back, he left a voicemail that Google Voice conveniently let me save.

“Convenient” because the man either lied, was mistaken, or was lied on by Clear later in the proceedings.

In his voicemail, he man promised me a free 14-day trial. He also said that they don’t do contracts (despite the literature in my hand), but they do restocking fees instead.

…Which is essentially a contract, but okay.

When I called him back on March 1, he explained that “Yeah, I need to close that kiosk. I’ve really moved to a different location.”

“Two week free trial,” I thought. “What could go wrong?” 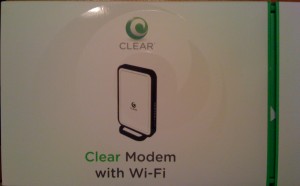 We exchanged information, and he arranged to ship the modem out that day, to arrive the next day. (No strangers in my house!). He’d call and tell me where in my house he recommended that it be placed for best signal, and if it didn’t work out, I could return the modem at no penalty.

The only problem is…

Why was I billed $73 that afternoon?

Fuming, I called the agent an hour after seeing the pending charge in my bank account. No answer, so I left a voicemail.

The next morning, I called again, and (via voicemail) said I was going to have the bank cancel the charge and call Clear support directly if he couldn’t be bothered to respond.

So then I geared up to start…

My approach to Clear was a multi-pronged blitz. First, I sent in a normal support ticket complaining of an overcharge. Then I found the area for reporting a “promotion not correctly applied”.

Yup, sent something there, too.

No response to either of those within 24 hours, so I tried the online chat. It’s touted all over their site, and I’m thinking that maybe, maybe, this is one company who can actually do a decent online chat.

As I went through the support area, though, I saw tons of customer complaints about speed throttling, references to ongoing class action lawsuits, lousy stock responses to complaints, and bad customer support.

Question #1: How in the world did I miss all this before calling the Sketchy Agent?

I can only blame the stress caused by my still-missing wedding dress and late invitation sending.

Given the bad reports, there was no way I was going to let some contact form submissions sit until they get around to them–which was good, because it took them about a week.

On to the online chat, because it’s quite inconvenient to make personal calls at work. I got a cheery personality on the other end who politely told me that the charge is “valid” because I have to pay for the service I’m using. She didn’t particularly care about what my agent told me, and was quick to give me a support phone number.

When I told her I wanted to just cancel the account and send back the modem–without paying any restocking fee–I was given a different phone number.

That’s fine. I’ve got a landline and a cell phone. I knew how this was going to go, so I carted my work laptop into a conference room and set up shop.

I finally got through to a person in 35 minutes using the “Cancel account” option on one of the support lines. Luckily, it was on the landline phone.

Then began the broken record game, my favorite customer support technique. I didn’t even bring up the account cancellation initially. I wanted to keep things–dare I say–clear.

I got the “valid charge” nonsense again, and I gave them the agent’s name and phone number, which they were completely uninterested in. They explained that they do 30-day no-restocking-fee-return trials, not free trials.

They noticed that I haven’t even tried the modem, and I reminded them to focus on what’s important: I want my money back.

After I openly accused their sales agent of lying to me, they arranged for me to get my money back and set my account to not be billed until the end of the 30 days. I then mentioned that I wanted a shipping label sent to me and my account closed.

“Oh, you’ll need to call Account Services for that. Here’s the phone number.”

That was a third phone number. And didn’t I pick “Cancel account” on the phone menu?

Also, why did I have to dial in my phone number to identify my account, and then have to verbally give it to the support person?

Last but certainly not least, why was my security question–which I typed in when I set up my account online–verbally asked over the phone? Who knows what I could have put in there.

My advice to any new or current customers is to answer “What city were you born in?” with “The pits of hell.” It’ll make for more fun support calls.

The next morning, I saw the refund being processed in my bank account.

How Many Licks to Get to the Center

In the account management area of the Clear site, there’s a link to “Request a Return Shipping Label”. I click it, and see the message:

This service is currently unavailable. Please check back later.

Chat with a Clear support agent.

Boy, I know how web apps can sometimes go wonky. I can wait a bit while they get a fix into place.

I checked later in the day… same message. I clicked to–sigh–chat with a support agent.

“Good morning!” I typed cheerily–I had my money back, after all–“I’d like a shipping label to return my modem.”

“Sorry,” the agent said. “You’ll need to call support to get a shipping label.”

…Are you fer skerious? “Why is that link on the page?” I pounded out angrily. “Why is chatting with you even offered as an option?”

“That’s for if there’s an equipment problem. You’ll need to call support.”

I closed the chat window without even politely clicking the “end conversation” button.

Posts from other frustrated customers were blowing up the forums.

That evening–it was a busy day at work–I called support as Greg nervously cooked dinner. He knows how I can be.

A strong-voiced, forthright lady (let’s call her Ms. Huffy) answered after I sat for about 11 minutes on hold. I wasn’t going to hold this whole situation against her–it’s not her fault (or so I thought!), so badgering her would be unfair.

Things proceeded from there. She explained the 30-day trial again, I explained the agent-who-may-have-lied-or-been-stabbed-in-the-back again. She interrupted me repeatedly to disavow Clear’s involvement. I didn’t care.

I requested a shipping label and stated that I wasn’t going to pay a restocking fee. She explained how the 30-day trial works again (no restocking fee). I reiterated my lack of trust in her company to uphold their promises. She kept interrupting me.

Finally, she said she’d email me a shipping label and that my account would be closed once the modem arrives. I like email. Email is fast.

We parted ways, and I waited for a shipping label. And waited.

I called again that night. This was March 15–two weeks after the erroneous charge and the start of this trouble–and if I didn’t get this modem back by March 31, I could expect another battle to get my restocking fee refunded.

This nice lady (Ms. Helpful) answered after just 4 minutes of hold time and checked the notes from the last call. She then told me that Ms. Huffy didn’t actually put through the cancellation.

Again: Ms. Huffy told me she was cancelling the account, but didn’t do it.

Apparently, the support agent herself is responsible for finishing the cancellation process (rather than some separate cancellation department).

Maybe she was busy, but I was definitely put on hold for a couple of minutes while she sorted something out. Maybe she got a drink of water.

Ms. Helpful fell all over herself to help me out, but we again went through the 30-day thing. I verified that I wasn’t going to be charged a restocking fee or billed for service, that I’d be emailed a shipping label, etc.

Within 10 minutes of ending the call, I had a shipping label. I also had a “Please return to us!” email.

By the next morning, I couldn’t log in and got a notice that my account’s been cancelled.

It remains to be seen whether I’ll be charged the restocking fee when they get the modem.

Now, I see the forum posts titled “Where is my damn money?” on the Clear homepage, as well as “Problem is Clear Throttling, and nothing being done to fix it“. 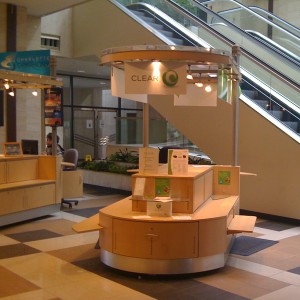 Now, I see that Sketchy Agent hasn’t closed his kiosk (meaning he’s still selling service), two weeks after idly saying he should do so. I debated including his name and the recording of his voicemail in the post, but G-hun convinced me that since he might have been stabbed in the back by Clear, I should give him the benefit of the doubt.

I can’t speak to the speed throttling experience, but this shadiness needs to be known.