A veritable festival of summer cooking, largely inspired by the CSA we’re part of.

First, we got purple carrots in one of our CSA boxes:

Then we were like, what do we do with purple carrots? The answer is, apparently, eat them.

Add a bit of sausage…

Let that simmer until the sauce has reduced a bit, then serve:

The carrots sweetened up the basic curry quite nicely, in a carrotty way. I recommend serving it with zucchini bread.

Grab your basic pizza dough recipe of choice, and instead of doing all that silly flipping, rolling, and twisting out to get a flat pizza, just stretch the dough into a large cast iron skillet after its first rise. I skipped the second rise on this one, and it was still wonderful.

Erm, no CSA ingredients in that one, I’m afraid.

This one’s all-CSA, though. It’s also one of the grosser-looking things we’ve concocted this summer, despite the great taste.

We had on hand: beef sirloin tips, eggplant of a few varieties, onion, garlic, and soy sauce. Greg the grandmaster fired up the wok, gave the beef a minute or two to get a head start, then quickly added the (still raw) eggplant. 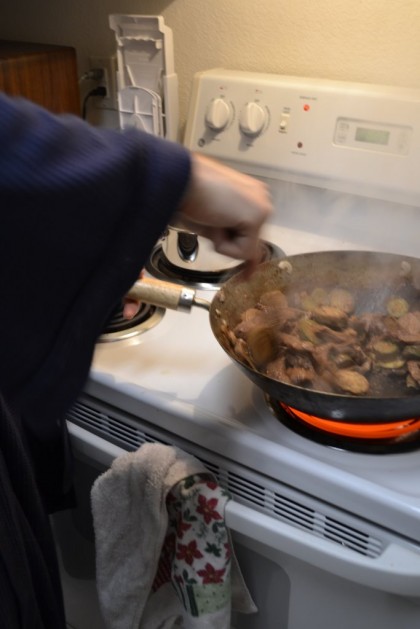 The end result was ugly, but pretty amazing (and I’m very picky about eggplant):

It’s excellent with white or brown rice. Now, I can only stomach about 7 pieces of eggplant in a single meal, and fewer than that in preparations that don’t blitz/roast the hell out of eggplant. Something about that super-earthy taste that gets to me. This was tasty, although I don’t recommend seasoning with soy sauce after it’s done being cooked. Plain salt works better, especially with white rice. The soy sauce was overpowering.