It was beautiful, and I don’t say that lightly. Many, many types of folks gathered together to celebrate their awesomeness. Even the naysayers didn’t seem to be very worked up in their naysaying while we were there, although one local preacher (Flip Benham–hell of a name) broke a noise ordinance and was taken away. (Must have been after we left, because we walked right past him on our way in and out.) He was the only amplified protester at the event, and had to actually stay outside the event because of that.

I took my camera, thinking that I’d be bold enough to get great pictures of everything going on, but found myself too shy to ask if I could take people’s pictures. There was an awesome Wonder Woman walking around, plus a man completely lycra’d in chartreuse (face included!).

The Human Canvas Project had a particularly visible showing, maybe because it resulted in folks walking around like this: 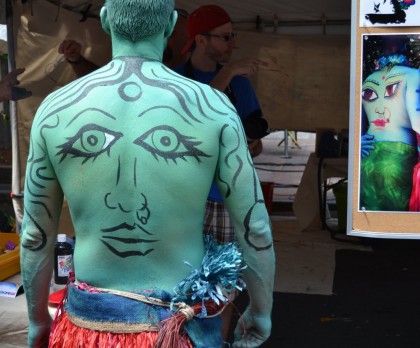 I was actually quite surprised at the showing by the banks. Wells Fargo was a primary sponsor, and Bank of America set themselves up with two tents in a prime picture-taking spot: 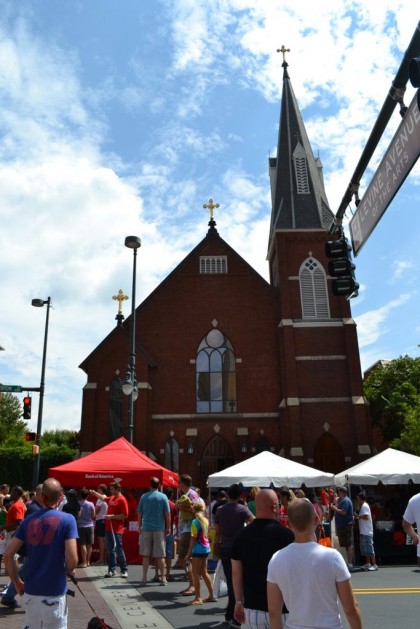 While I felt uncomfortable singling out the event-attenders for photos (“Hey, you look interesting and unique: may I take a photo of you?” seemed rude), I had no beef in targeting the protesters.

Actually, I kinda did. I didn’t (and don’t) want to validate their hateful messages, but I did find them fascinating in their persistence (or lack of), desperation, apathy, whatever. Here are a few: 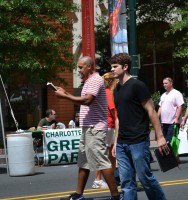 I picked up a couple of books and oogled everything else. I wanted a shirt, but didn’t see one that fit with my typical fashion style, so I passed.

There were also handy notices of upcoming big club shindigs; I may be getting my dance on soon.