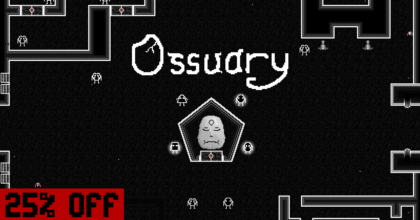 Ossuary—Future Proof’s first commercial game release—is part of the Steam Summer Sale and will be 25% off until July 4. If you haven’t had a chance to play yet, it’s only $7.50 (USD). If you’re on the fence, the demo, “The Hodge-Podge Transformer,” is also on Steam.

It’s been on Steam for a year and a month now, and it’s been a fascinating experience. After watching a few Let’s Plays of Ossuary and “Hodge-Podge,” we released an update in December to improve the tutorial experience and solve some colorblindness issues.

Our current work in progress is Exploit: Zero Day, a cyberthriller where you roleplay a hacktivist by making and solving puzzles. It’s pretty cool, and our alpha players are making really friggin’ awesome puzzles and stories. If you want in, hop on the monthly mailing list and you’ll get a key in the next newsletter.

END_OF_DOCUMENT_TOKEN_TO_BE_REPLACED

5 Things I Learned as the Internet’s Most Hated Person | Cracked.com
"I watched every avenue of social media suddenly blow up with messages of abject hatred from thousands of strangers. For the first five days, I couldn't sleep. Every time I would start to doze off, I'd be shocked awake from half-asleep nightmares about everyone I love buying into the mob's bullshit and abandoning me. The ceaseless barrage of random people sending you disgusting shit is initially impossible to drown out — it was constant, loud, and it became my life."
They Are Not Trolls. They Are Men. | Make Me a Sammich
"By calling these people “trolls,” we are basically letting them off the hook. It’s a lot like the “boys will be boys” mentality that helps to keep rape culture thriving, but it’s also different, because boys are expected to be human. By calling these people “trolls,” we relegate them to non-human status, and we make it clear that we don’t expect them to live up to the same behavioral standards as human beings." END_OF_DOCUMENT_TOKEN_TO_BE_REPLACED

Ossuary, that game we released back in November, is now on Steam Greenlight.

Greenlight is a weird phenomenon, and I’m aware that there are folks who read this who might not know how it works.

Which is okay, because even the rest of us kinda don’t.

END_OF_DOCUMENT_TOKEN_TO_BE_REPLACED

Go read it and subscribe! We’re just getting warmed up, but there’s an announcement there that will be of some interest to folks who might be asking, “Whatcha working on now that Ossuary is released?”

I’ve got a couple of posts lined that will likely end up there–I’ve been playing in the world of free-to-play (mobile) games on my shiny and fast new phone, and the ethics of the set are… fascinating.