I managed to attend a great gem of a group gathering this evening — the first 2010 Carolina Girl Geek Dinner. I hadn’t heard of them before I got word from Diona yesterday, who I had the joy of meeting in person, along with her colleague Tessa.
The three speakers for the night covered the production and importance of “social capital”, the creation of a personal (or company) brand through online presence, and (from a Dell rep) a really sweet iSCSI SAN system Dell is selling.

No, I know next to nothing about that level of sysadmin. But it was awesome when he started pulling out disks, power supplies, and controllers from the SAN, and the video on-screen kept playing without batting an eyelash. I took notes, too, because you never know when stuff like that will come up. 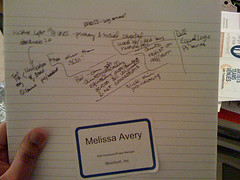 The social networking aspects have set wheels in motion in my mind. Angela Benton of Black Web 2.0 spoke about the creation of a personal brand — a unification of your web presence (LinkedIn, Twitter, blagoweb, Facebook) to create a single “you”. So that the “you” on LinkedIn is the same “you” on Facebook, etc. There’s a tough line to draw there in terms of how filtered, dry, and unreal you want to be in creating that presence. How afraid are you of being Dooced? How much of your personal brand will you share/give/overlap with your company’s brand, especially if you aren’t a major stakeholder in it?

(There was actually a reference to Doocing tonight. I hadn’t heard that in a couple of years — probably back when I let dooce.com slip through my RSS reader’s cracks.)

It’s funny that this unification was talked about tonight. Just this morning, I struggled with the decision to move my online library of books from LibraryThing to Goodreads. Well, not move, but copy my collection over. I want a way to unify my web presence — right now, I have the blag posting to LJ and to Twitter and Facebook. Goodreads can holla at Twitter (which LibraryThing couldn’t) and work on the iWone (which LibraryThing couldn’t do effectively). I don’t mind multiple services, but I hate duplicating my effort (although maybe I’ll build an Master Manager that lets me manage them all from one interface).

I haven’t looked into options yet, but I want to be able to post book reviews here on the blag and have them crosspost on Goodreads (which LibraryThing didn’t expose an API for). I want Goodreads on LinkedIn instead of the Amazon reading list. In fact, I haven’t been pushing any content to LinkedIn, really, because I felt it should be this super-serious, über-professional profile instead of accurately representing my skills and interests, which range far and wide from being a code monkey or even a PM. Silly me. When is boring ever interesting?

Anita Blanchard of UNCC spoke at the dinner tonight about the growth of strong and weak interpersonal connections through old and new internet social interactions. MUDs and MOOs versus Facebook and Twitter. She touched on the size of people’s “strong” network — the nearly-daily people that you get the most support from — and the “weak” network, the supposedly 1000+ folks that you’re acquainted with but aren’t close to. Food for thought; I love that there are people researching the sociological and psychological aspects of this stuff. 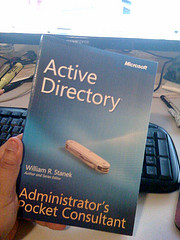 As the cap to the evening, there was a giveaway of Dell-donated loot, including Windows 7, Office 2007, and a few books. My name got called, and I got something fun and esoteric: an Active Directory reference book. Don’t know what I’ll use it for, but I do know that I’m so often annoyed by the myriad of logins I have to manage at work that I may read up on the auth components just for giggles.

I don’t think I’ll become a social networking nut, but making the name “Melissa Avery” a bit more cohesive (and nixxing “Lissa”, perhaps) is probably worth my while to do now.