Just a couple this week. It feels like everyone’s quiet on the blagowubs lately.

Um, that’s more this kind of MIPS, not that. 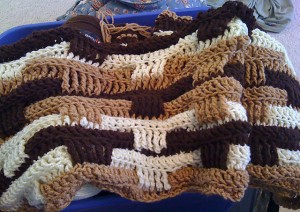 I haven’t been a heavy crocheter since shortly after I left teaching in early 2008, but way back then, I started a blanket. It’s a gorgeous design, and I picked the colors based on the decor of a friend’s house. I don’t keep up with him anymore–and he’s married, so no telling what his house is like these days–but I still love the blanket. It’s wide: wider than 6 feet, which makes doing each row a painfully long endeavor.

My favorite times to crochet (and knit, whatever) are when I’m watching television or on long car rides. Unfortunately (or fortunately), I’ve been wrapped up in a lot of computer-based volunteer work, which means my television time is spent on my netbook. In cleaning out my former office for our upcoming roommate, though, I tidied up all my yarn. I found the 10 skeins of midnight blue yarn for the cable-knit afghan I was going to make my father (I didn’t end up with very usable cable needles, alas), the little purple baby blanket that only needs about 5 repeats of its purl/knit checkered pattern to be done, and all my thick wool squares (presumably to be quilted into an afghan).

END_OF_DOCUMENT_TOKEN_TO_BE_REPLACED

Happy Friday! I present to you Chapter 12 of the Witches of Ming Ung, “Making Peace“:

Hardi scoffed. “Give it up. Give us the antidote. They’ll get you eventually, and another ten thousand people might be dead in the meantime.”

His jaw set, but he didn’t say anything.

“I’ve got a deal for you…” taunted Hardi.

I want to go home and play with my computer now.

I tried my hand at the Star Trek MMO Saturday night as I was avoiding standing up, sitting down, or walking up and down the stairs in our house. I generally stay away from MMOs: I don’t like internet video game people, I’m prone to throwing myself into video games for hours, and MMOs seem to be geared towards grinding. Greg’s explanation–and this makes sense–is that it’s a server resource necessity to try to lock people up in personal instances of the game (dungeons, etc.) instead of in the shared world. (Edit: Two different issues, per Greg’s comment.)

I went into Star Trek cold, having read a few reviews but no guides to character building or game play. This may be the cause of some of my problems with the game.

I didn’t get a major grind feel from Star Trek in the couple of hours I played, but I also didn’t get a feel that the gameplay was much more advanced than A Final Unity: fly around in awkward battles; receive awkward, under-clued missions; run around awkwardly on planets.

That said, I still want to give the demo a couple more hours of play to see if there’s anything more. Wandering around in the Earth starbase, I watched as people chatted about how much the game sucks and they’re about to cancel their accounts, the game’s going to fail after another 8 months, etc. Do people do that in WoW?

Aside from the starbase chatter, I felt like I was completely alone in the game. All my officers are NPCs (don’t know if that’s normal), and no one’s randomly attacked me while I was shooting down Borg. I’m okay with that.

So far, though, all I’ve done is fight. It’s a rare thing for me to want puzzles in a game, but I made a science officer, dammit.

I’m not sure what a lot of things in the game are for, like Kits. They give me stuff that I don’t get to use. Why do I have a science office slot on my bridge… when I’m a floppy-armed, prancing science officer myself? Do I really need to pick these bridge people carefully?

So far there’s nothing to investigate, and the few anomalies I find that I can scan have an absolutely ridiculous game mechanic. You have about 5 seconds to match the waveforms of the item to unlock some info, and it’s a dumb mouse interface that requires clicking up-down-left-right buttons to change the amplitude and period of the wave form. By the time I get my mouse on the controls and process what I need to do, the damn thing is gone and I apparently need to find a major research facility to figure out what some be-boop (rock, mineral, whatever) is.

Using up skill points is confusing, too. It’s unclear if there are “levels” to each skill or what exactly the numerical bonuses are adding to. I don’t see a clear strategy to point distribution, because I don’t foresee an end goal: I don’t know what my character could possibly become, so I can’t plan for any eventuality.

It’ll get about two more hours of my attention, if the demo doesn’t cap me before that.

I mentioned last week that I had a mostly new computer coming in. The case arrived on Monday (filthy teasing UPS), and the CPU and mainboard arrived last night.

Folks, this thing is a computer. 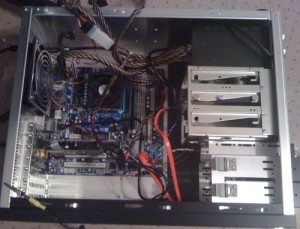 Going from a single-core 2.4 GHz processor to a quad-core 3 GHz may completely change how I view my computer. I’m serious.