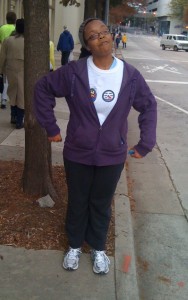 In summary: it was awexsome.

Saturday morning, I got up at the butt-crack of dawn and ran in the Jingle Jog, which I’ve mentioned training for before.

I’m out of practice with first-thing-in-the-morning runs these days, so I was up at 06:00 even though the race wasn’t until 08:15. I had about a third a cup of coffee and some yogurt, and spent a little time just waking up–a bit of reading, a bit of writing.

I’d planned get to the race by 07:45 to give us plenty of time to warm up on-site, but as is true any time I have to drive somewhere, we were late. We parked about 08:00, and the half-mile or so walk to the race area was most of our warm-up. The weather wasn’t bad at all–maybe 35-40 degrees Fahrenheit. I wore a wicking undershirt, a long-sleeved shirt over it, a zip-up hoodie, and gloves. 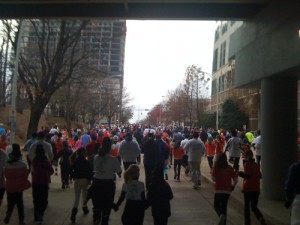 There was a marvelous showing by a local group, Girls on the Run. The back of the pack (where Greg and I chilled–literally) was chock-full of elementary and middle school girls with their coaches. It was really awesome to see such a huge turnout of young peoples at an athletic event.

Once the race started and we got to the start line, I started tracking our run on my iWone. The start was rough with walkers mixed in with the runners, and kids criss-crossing paths willy-nilly. I swear, not a single one of those kids were considerate of cutting off people, and some of the adults were just as bad.

Greg and I weaved our way through (more gracefully, hopefully) until we could maintain a comfortable pace. Once we got steady, we were able to hold a good clip for the entirety of the race. We did about a 13:00 mile, which is considerably faster than the 14:00 – 14:30 minute miles we’ve been doing in our training runs.

We totally rocked the race.

I’ve complained before about all the hills in my neighborhood, but I can definitely say they served us well. Our pace barely jigged on the uptown hills, which was an awesome feeling. 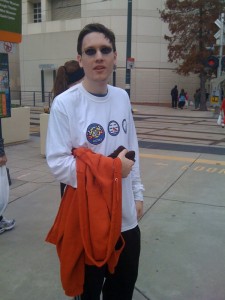 The only rough spot in the race was actually at the end, after the finish line. Over the course of the race, I’d unzipped my jacket and taken off my gloves and wished I could find a way to get off the long-sleeved shirt. I was only cool enough courtesy of the breeze I was generating from running.

After the finish line, though, was a mass of stopped people waving at their parents and friends. I immediately started overheating and getting light-headed, and Greg had to get us out to the side before I passed out.

Being a furnace has its downsides. I probably should have just worn the undershirt and the hoodie, and played with the zipper as needed during the race.

We took a smidge over 40:00 for the 3.1 miles. I’m really optimistic about getting that down to 30 minutes over the next few months. 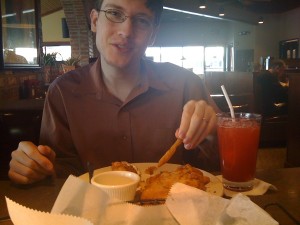 Greg and I were totally giddy afterwards. We hobbled back to our car (more of a cold-down than a cool-down, after all that sweating), not really the worse for wear, although I insisted on stretching some before folding myself back into the car. We ate an inappropriately huge lunch (“refueling” after a 3-mile run? Um, no.), and I chilled the rest of the afternoon.

I think this is where Greg and I are going to diverge in training. He wants to stay in the 2-3 mile range for a while, but I want to move up to 8k (5 mile) distances and get my pace up on the shorter distances.

I’ve found some good materials for making a training plan since my last post on the matter, including this 5k-8k interval-based musical training program. I don’t think I want to do the same run 3 days a week as they suggest, but I’ll want to keep a shorter run in the middle of the week and add a day of some speedwork like Tim Neckar suggests–either timed (30/45 second speed bursts) or distance (1/4 or 1/3 mile bursts) repeats. I’ll alternate weeks on the speedwork, so that my plan may look something like this (distances relative):

Add 2-3 days of dance onto three days of running, and that’s a full schedule.

I’m ready to get started.