One of my latest home pet peeves is my stereo. I’ve got a nice, old-skool 5.1 setups (sans a subwoofer)… which means that my living room is chock full of cables.

As I clear out things like the broken desk chair that’s been in our living room for a year and a half, more speaker cables are exposed. Fugly eye sore. I like my sound system–I’ve had it for over a decade now (mostly). The receiver is an old Harman Kardon AVR 110, and despite predating component inputs (much less HDMI), it sounds beautiful when I use optical/coax audio.

In addition to the eye sore of the speaker cables, though, I’m also finding myself with fewer and fewer components. My massive 200-CD player died a while ago, and all my music is digitized now, disks stashed. I also don’t really listen to music in the living room anymore–headphones work better for dishwashing and general chilling.

My DVD player also kicked over recently, and I found out that our Playstation 2 can play DVDs. We use our Wii for NetFlix. I have nothing that uses HDMI (although my TV supports it). The PS2 is component (although I have to switch to composite for Disgaea). The Wii is S-Video + composite. Both of these devices can plug into the TV, but the sound is tinny.

I investigated wireless solutions for speakers, but they won’t really solve the problem. Here’s my living room, with wires: 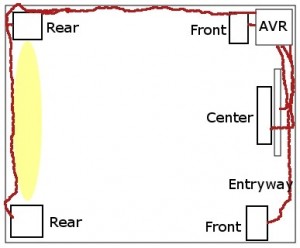 I could work up a wireless solution for the rear speakers, since all the cables would be behind the couch. The fronts, though, would need a second wireless unit to keep from running pretty much the same cables.

Two wireless units? Probably not worth the cost.

So which wins? My snobbish audio tendencies, or my minimalist desires?

The thought of lugging those speakers into a new, smaller apartment this summer made the decision easy. I’ve also moved that heavy-as-hell receiver from place to place (and there have been quite a few places) since about 2001. It requires a large box, lots of surrounding paper, and is so heavy that I can’t pack much else in the box and keep it carryable.

Luckily, Greg considers surround sound a “nice gimmick”–how this man was ever a musician, I don’t know–so he’s ambivalent about the nicer setup.

I moved everything to the TV yesterday, although I haven’t completely dismantled the stereo yet. We watched The Cube (good movie!) through the PS2 and some more Fruits Basket (so sappy!) through the Wii, and although the sound quality was pretty lousy, it was certainly survivable.

The nice thing is that I may be able to get a cheap or free soundbar speaker to compensate for my TV’s lack of any sort of bass. It could sit right where my center speaker is now.

If none of my friends are looking for stereo equipment at the moment, it’ll be Craigslist or the new-to-me Freecycle for the receiver and speakers.

I think I’ll put a plant where the receiver is now, above the fireplace. Or just a candle.