I made a questionable decision this afternoon.

After coffee with a yogi friend, I was inspired to start climbing back on the yoga horse. Most yoga studios in my area only have Saturday morning classes, so I had very few options for something in the afternoon.

Whatever. I was feeling brave. I signed up for an all-levels Vinyasa hot class at a studio I’d never been to. Ninety minutes.

END_OF_DOCUMENT_TOKEN_TO_BE_REPLACED

The trip to Russia is in planning–our traveling companion is researching hotels (so we can get visas!) and sight-seeing destinations in Moscow and St. Petersburg.

What’s been surprising me is how much negativity I get when I tell people I’m planning a visit to Russia. “It’s depressing!” (with pictures like the one to the right) “Don’t go to XYZ!” “It’s super-dangerous!” “The USSR?!”

It’s disappointing that my friends and colleagues have little other than (relatively uninformed, I think) skepticism and dire warnings. I find wonder in so many things; a few pictures from the internet don’t suffice to satisfy or discourage that. I might choose not to visit an active damn war zone. I might choose not to flirt with women or gender-bend in a homophobic country. I might also choose not to travel alone.

But as someone who still marvels at standing at the edge of a country or continent in their own damn state, how can I pass up an opportunity for this kind of experience?

I resumed going to church fairly regularly. Had my perspective on interpersonal communications majorly shifted. Got married to a great fellow. Got a running partner. Made good progress on my novel. Learned how to incorporate a business. Paid off my student loans (!!!). Lost some weight. Got stronger, more fit, and resumed dancing. Made and held to some good financial plans. Blogged pretty regularly.

Still feel like I only did about half of what I “should have”, of course, but I’m happy with the year, overall. I succeeded at most of what I wanted,

and made good headway on what I didn’t finish.

Regardless, 2012 shall be a more adventurous year, featuring new employment, two trips/vacations, and a plethora of writing, coding, financial management, and gettin’ fizzit.

END_OF_DOCUMENT_TOKEN_TO_BE_REPLACED 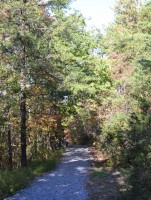 What could be better than a trip to Crowders Mountain on a perfect Saturday afternoon?

Both the weather and our camera this time was good enough–and we’d just finished our second photography class that morning–to get some vague shots of Charlotte. Out zoom lens (55-200 mm) isn’t quite zoomy enough to really compress the distance, but it was fun trying, especially when we needed to manually focus or do a focus lock. 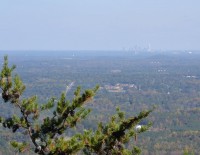 Instead of just doing the 0.75 mile trek to the top and back (which includes 300+ damn stairs), we decided to hike some of the back trails. All in all, I think we covered 5-ish miles, but my goodness. The Rocktop trail mentions that you’ve have to climb over some rocks. Very nice of them to warn you.

What they don’t tell you is that you’ll be facing a 4 foot wide stone “crawl way” (no way I was walking on that) with pretty steep drops to either side.