I had an… unforgettable dinner this past Saturday night with the local live-action roleplaying players that I’ve been gaming with for the last handful of years.

I took a break from gaming with them last summer after my surgery, initially due to the inconvenience (I couldn’t drive, and the sling was uncomfortable), and then due to the fact that when I weighed the fun vs. the toxic behaviors the group has, I found I’d rather be spending my time doing things like building Future Proof Games.

The dinner on Saturday was to get folks face-to-face to talk about a big issue in the group: they lost their regular gaming location at the end of 2014. Some games have had to be canceled, but folks have been very generous. People have opened their homes to host a game or two, and one person rented hotel rooms for us to game in.

That night, though, I heard something pretty disgusting — a denigration of people’s generosity, at times in the same breath as an exaltation of their own (the below is paraphrased, in part to remove names).

END_OF_DOCUMENT_TOKEN_TO_BE_REPLACED

The old site was brown and more brown, combined with a ginormous font file resulting in some terrible behavior.

I shall say no more. Those dark times are past.

I’ve been working on the redesign for a while, and I hate that it took so long, but I’m pretty happy with the results. Still kept the dark feel, but moved away from the monochrome look.

END_OF_DOCUMENT_TOKEN_TO_BE_REPLACED 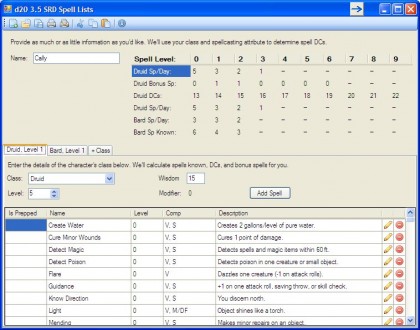 END_OF_DOCUMENT_TOKEN_TO_BE_REPLACED

Downloadable from The Charon Sheet. (Also, I’m currently reading The Principles of Beautiful Web Design so’s I can make TCS less sucky and more purdy. Expect design changes there as I learn how to do this crap from scratch.)

Only two issues fixed, but they were kinda show-stoppers for the affected folks. Details on the issues fixed.

So I’m in a D&D 3.5 campaign now. And I’m playing a Druid, which is kinda exciting–it’s the first time I’ve played a Druid at a high enough level that I can shapeshift, and I just tipped 5th level on Sunday. (Campaigns always fizzle out early…)

Anyway, the campaign is a hodgepodge of standard D&D and Sandstorm, and summoning restrictions by the GM mean that my spell list involves a fair bit of swapping out that’s a little annoying to manage. For instance, I’m using Sandstorm’s “Desiccate” instead of “Summon Nature’s Ally II”, since I can’t summon.

Since Druids are the type to prepare a few spells per day from a large list of available spells, I needed a quick way to see all of my available options without flipping through two sourcebooks and my swap list at the table. Then I wanted to avoid having the jotted down short-hand description of the spell that I refresh every “day” as I try out new spells.

Pain in the ass.

A bit of Googling lead me to conclude that with the advent of D&D 4e, many of the 3.5e resources… disappeared. And by disappeared, I mean:

All files withdrawn at the request of Wizards of the Coast.