Sorry for the eighties flashback (which are, apparently, considered bad by some… I love the music, personally), but I just whipped Gnus into shape. It is now reading and posting mail on the Rose IMAP server, and playing along well with my dummy POP3 account. I’ve been working on this damn thing for two days, and finally got it working fully (minus scoring) about an hour ago.

Why Gnus? I don’t like the Webmail solution used by Rose–it’s slow. I also don’t like Outlook, because it’s even slower (that slowness was what prompted me to switch to Webmail a few months back). I had fun with Gnus in my previous experience with it, and the challenge of setting it up was all a part of the fun.

I had a bit of trouble finding the relevant Windows version of XEmacs–I finally got lucky, it seems, with one particular FTP server I surfed. Installation of that went smoothly, and I found myself immersed in the world of meta keys (Alt) and nested parentheses, for the first time since I gave up my old laptop running Mandrake. I immediately set about making a config file.

Getting the Rose IMAP server to cooperate was sheer hell, simply because of my own stupidity. Silly me for thinking that a lack of “file not found” error didn’t mean that the file trying to be executed (OpenSSL – needed to simply login to the server) wasn’t there. In other words, I really should have obeyed the first USENET post I found and installed Cygwin, with installs not only OpenSSL, but a bash shell, and my “favoritest” command-line, um, command of all: ls. I don’t know how many times I’ve typed “ls -al” when I needed to type “dir”… At any rate, once I got the PATH straightened out, all was peachy keen on logging in, although I still can’t get Gnus won’t pull my Kerberos password from .authinfo (but it will get my username). But that’s relatively important.

So, with a connection to Rose created, I quickly changed the format of the Group (where the IMAP folder or newsgroup names are shown) and Summary (where the articles or e-mails are threaded for your perusal) buffers to be more informative and readable, then began to setup outgoing mail.

I had a ridiculous fucking time setting up SMTP. Good goddamn. That was the bulk of the past two days. I made sure the smtpmail package was installed, copied it to about five different places, just in case Gnus couldn’t find it with all the other packages, and tried about four different ways of calling it. It kept repeating that it couldn’t find “fakemail”, and none of the USENET posts found were useful, except to inform me that I shouldn’t bother hunting down the file (and I shouldn’t need to) because it wouldn’t work in Windows any-damn-way. The “fakemail” requests meant (I believe), that the mail sending method wasn’t setting correctly, despite all my attempts. I finally had to give up the ghost and use the graphical customization of Gnus, because I couldn’t find the right combination of varibles to execute what I wanted. So that’s sitting in my global custom.el file; I haven’t tried moving the command over yet. Thank goodness Rose doesn’t actually require SSL for SMTP access like their “help” site suggests.

After that beast worked, I was left with the setup of group-specific settings–namely “identities”. When I’m in a Rose IMAP folder, send mail from this address, to this SMTP server, using that signature, etc. Had a bit of fun there, too, given that my posting-styles nested inside of the gnus-group-customize didn’t want to work. Fixed that shit with gnus-posting-styles and some fun regular expressions.

Finally, I had to do something about the handling of HTML messages–Gnus wasn’t rendering the messy shit that Rose administrators spam the campus with in any readable form, and wading though Microsoft-esque HTML (that shit is bad) to extract the content from the styles is nearly impossible. Gnus was supposed to load w3, a pretty nifty little (X?)Emacs browser, but didn’t, and, quite frankly, I didn’t feel like fucking with it. So I found this here USENET post, fixed the paths for Windows, and dropped it in. It works nicely. 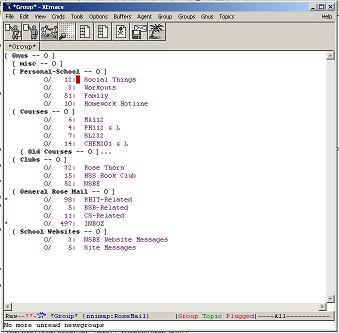 A screenshot of the Groups buffer (there aren’t really over 400 e-mails in my Inbox, trust me)

I bitch, but I love it to death, and wouldn’t give it up for anything. Even sex.