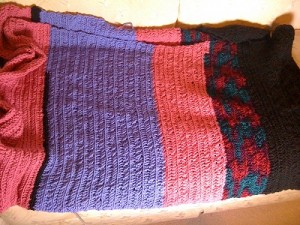 Saturday was my bir’day! I’m a ripe young mumble-something years old, and I don’t feel like I’m getting old–I feel like I’m running out of time.

Advertising that I didn’t want gifts (hello, getting rid of stuff) meant that the gifts I did get were thoughtful and amazing. A set of writing books covering memoirs, grants, motivation, and fiction–writing techniques. A shorthand manual. Weber and Neal Stephenson books. Amazing and creative fancy-pants yarn (color 12). 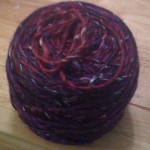 I picked up yarn for a new project myself on Saturday–an afghan to be finished by Feb 13 and begun after I finish my current afghan. Greg, being Greg, picked a pretty, soft eggplant-colored yarn for the blanket, and it’s going to be beautiful. I’ll have to relearn how to knit for that and the wavy scarf I’m doing with the fancypants yarn.

Sunday was spent housecleaning, and everything is ready for the short-term roomie. I got the carpets cleaned, closet emptied, bed set up and made, and bathroom reconstructed from its former cat-home. Whew. Only problem is, I now have to go through my bedroom and rest of the house again to sort out what things just got shoved from one room to the other. It’s like a Towers of Hanoi game… with my stuff.

I was introduced to Feedback Roulette through a newsletter from Dreamhost (of all things), and signed up a while ago. It’s a site for providing reviews of other sites in usability, design, and content. I didn’t do anything with it, and didn’t hear anything from it, but it’s a nicely designed interface and pleasantly simple. There suddenly seem to be people on the site, though, because I received three reviews in one day (and gave a couple myself, of course).

I remember back when Greg first released Necropolis and Majesty, and how I used to have to rope him out to dinner after he’d release a game, or he’d be anxiously refreshing feedback pages and getting upset about feedback. Even now, I look at the rudely dramatic feedback he receives (“Looming is the worst game ever”? Really? Ever?), and am very proud of his kick-assery in moving forward and doin’ the damn thing. I may have been jocular in dragging him out of the house, but I’ve never mocked his stress in putting his work out there for world-wide criticism.

I want that thick skin. Not to shrug off feedback, of course, but I want to be able to submit my novel for consideration again and again, and not cry for long if they don’t like it. I want to be able to pick out useful bits from a poorly-written but well-meaning review and consider them graciously.

My site’s a good place to start with that, since, while it is near and dear to my heart (eight years of irrsinn.net, y’all), there aren’t as many hopes riding on it as, say, my novel. Or the apps I’m developing. I’ve already made some tweaks based on the feedback I’ve gotten.

Plus, it’s fun providing helpful feedback to other sites. I can’t design from scratch worth a damn, but I can recognize flaws and suggest improvements in specific instances. There’s everything from club websites to businesses to personal blogs on Feedback Roulette, and, as the name suggests, what you get is random.