Greg‘s been so crunk about Minecraft, I simply had to try it. It’s… alright. It’s an alpha, so none of this is any sort of realistic “Geez, why hasn’t the developer done this?” critique. I assume they’ll get taken care of eventually.

I’ve been playing multiplayer with Greg (which means no monsters), and first thing I ran into was the absolute lack of goals and structure. I love The Sims. I’ve taken to playing SimCity 3000 again. Those games have explicit direction provided from the game itself. Minecraft has one (in single player): don’t get et. 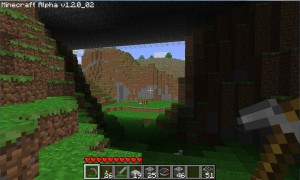 So I fire up the server (multiple cores!) and start playing. Greg immediately starts running around, mining stone and dirt and trees, directing me to make workbenches and tools. I was instantly thrown back to memories of my old, sad Starcraft days, where someone more efficient can kill your game while you’re still trying to figure out which way on the tech tree is “up”. How does he know what to make? How does he know how to make them? The craft formulas aren’t crazy once you get the hang of them, but there’s no clue as to what the options are. Luckily, there’s a wiki for us clueless types. 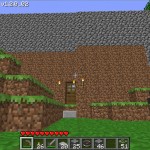 We start making a home in a cave, nice a cozy, including a sign containing our usual slogan around the house: “Happy home”. Very cute, but it doesn’t inspire me to create anything, because it’s small and cramped. He goes off and makes a very cool glass tower to the sky while I dig through the earth to the bedrock. …And then build spires to get coal off of tall rock faces. Lots of mining, but little crafting.

Then I finally get an idea. I want to make a house above-ground. A big one. One that I can expand the walls of as I build resources. One with a glass roof. One where monsters (whenever they come to multiplayer) can’t get me. One with pigs and chickens inside.

I only have one deadline: the house has to be done before monsters spawn in multiplayer games, or I’m probably hosed.