With the arrival of R’lyeh last week (my very first Luftpost!), I was super-crunk to redecorate my living room.

The pretty blue frame Verena/Jonas sent the picture in didn’t survive the Luftposting, but a quick trip to Ikea (where the original frame was from) would fix that. The picture was A4 size, though, and Ikea in the U.S. was like, “Here, have letter size.” No, I’m not going to cut a damn inch off the picture. “But, but, we have letter size!” Fine, then, a bigger frame it is. Add a black fabric backdrop, and I think it turned out quite well.

Getting it on the wall required some furniture shifting I’ve long wanted to do. We had this terrible tall black stand on which we kept DVD/game cases and miscellaneous crap. I’m not a fan of dark furniture (anymore), and it was sucking up what little light we have in the living room. That wall also had no pretties other than the clock, not helping with the drab, post-collegiate look. 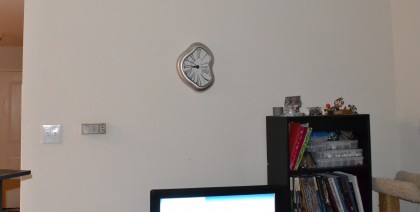 When I started these shenanigans on Saturday night, I also took down a clever but dark and hard to read poster representing the 2011 U.S. federal budget that floated above the couch. Again with the light usurpation.

The entertainment stand is gone now, and I’ve moved our cat stand in its place out of a corner, to the joy of Greg-the-cat. He frolicked on it for the rest of the evening, which he hasn’t done since we moved in. Jackie was less impressed, but generally excited (or maybe nervous) about the entire process.

We also picked up a bunch of mirrors during our Ikea visit (they played loud country music the entire time we were in there). My parents often put up (very heavy!) mirrors in their living rooms, which always made the room much brighter and more elegant. Totally hijacking that idea (with more movable mirrors), I created an ensemble of mirrors above our couch on Saturday night, having all sorts of fun climbing over the couch, using a level and power drill, and drawing on the walls. Greg was out until the wee hours of the morn, so I blasted British rap on the PS3, ate popcorn for dinner, and had lots of disorderly fun.

Sunday evening, we finished the job by crafting a pretty little “fall” over our gaming bookshelf and getting R’lyeh up. With the entertainment stand gone, we finally had enough shelf pegs to get a glass shelf under our TV, meaning our Wii and XBox, previously tucked behind the TV, could be more accessible again.

The finished product of the TV wall (complete with happy cat): 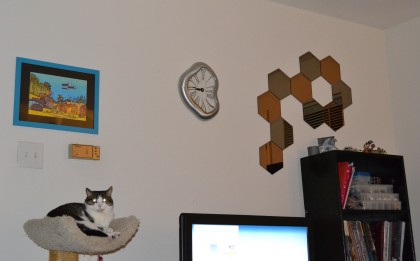 I’m still getting used to the mirrors (yes, I do startle myself), but I love, love, love the amount of light that bounces around now. I still want a ceiling fan/light in the living room (we’d take it with us when we moved), but this is quite nice.