We took our second trip to Pawleys Island on our anniversary weekend. Notice the lack of links to that first trip? That’s because 1) I didn’t take my camera, and 2) I was hiding from the world after my wedding.

I forgot the good camera again this time, although given the way sand managed to insinuate itself everywhere, I’d’ve been afraid to unseal the carrying bag.

After roasting wonderfully on the beach, we spent time wandering around Brookgreen Gardens–again, our second visit. Last year, I was much more acutely into gardening (living in my last apartment wasn’t encouraging, but my garlic and my green onion lived on until this summer). This year, I had a horribly sore neck and it was about 105 degrees outside, so I was mostly trying not to take a jarring step.

That said, Greg and I were once-again awed by the live oaks with spanish moss. Awed enough that an idea began to set in when I returned to Charlotte.

The beach is such an iconic place for me–standing on (roughly) the edge of an entire damned continent; the relentless sun (no, I haven’t reread Camus recently); the scary, fun, and exhausting ocean itself; Brookgreen Gardens (next time we’ll see the damned butterflies!); the change in flora and fauna and food and lifestyle.

It’s connected with the awe and wonder and evolution of my relationship with Greg (and now Deana), yes, but also with my own self. A great way to see differences within yourself is to take a trip to a place you’ve been before relatively recently, and see how differently you respond. 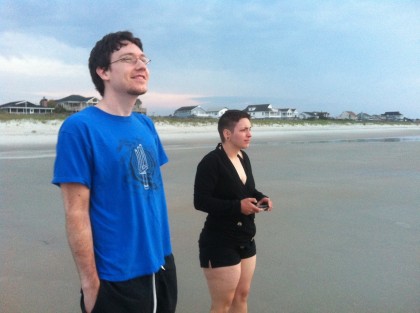 In keeping with recent explorations of body modifications (my ears are now a still-slightly-gross 9g!), I’m scheduled to get my first tattoo on June 30. It’ll be a (stylized) live oak. I’ll get to see and verify the design before pen touches skin, of course. I’m really excited.

One thought on “Beach, With (Body) Mods”