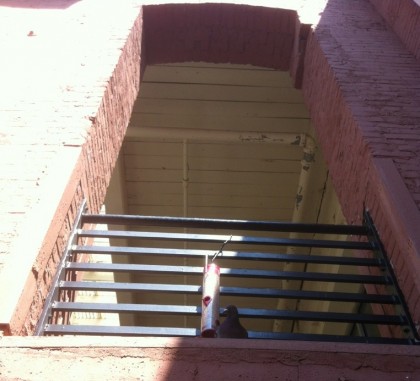 We briefly had a new neighbor in the form of a pigeon. It was a very tame pigeon, willing to walk up to people and to stay still when people approached.

It also had a tag on its ankle. We think it’s a secret agent messenger bird, recently returned from Afghanistan.

See, the former occupant of our apartment got mail under several different names, but lived alone. They were good, solid names, too, like James Smith, and Colin O’Barrah. One was a gun permit postcard. One was a Title Nine magazine. Several were letters from governmental addresses.

And then the pigeon showed up, cooing innocently around our apartment with its tagged ankle.

Finally, Greg stopped to talk to it:

And then he flew away. I have faith that if it made it to Charlotte, NC from Afghanistan, that Agent Pigeon can make it to Seattle to meet with his favorite secret agent.

One thought on “Secret Agent Pigeon, At Your Service”