Chapter 9 of Witches, “Pursuit” is live. Actually, it went live yesterday, I just neglected to post here for it. I was busy having my ass handed to me by some type of hydra. Damn D & D 4e hydras. It had seven heads by the end.

“But how do we get you out of here without anyone noticing?” Robert asked absently. Satisfied that her hand was fine, he pulled his hands back out of the attached gloves.

Hardi tamped down a grin of victory. “Nice and easy. You’re going to create a distraction, and we’re going to slip out.”

A small smile played on his lips as he asked, “What kind of distraction?”

No links this week. I’ve been planning hard on the Geist Character Sheet Manager, working with Greg to come up with and prioritize requirements. I’m playing around with the Agile “story” idea. It seems like a good informal way to gather reqs, though I’ve done most of the generation of the ideas. Greg should really be doing the bulk of them, since he’s a prime example of a user on both the game manager and character sheet user sides. He’s been great about helping come up with cases that fit World of Darkness games I don’t play and giving specific examples of things I have to account for.

I’ve got a preliminary feature set for my first iteration of the game manager side, and boy, did it break my proposed timeline. Depending on what my priority cut-off is, it may be late September to mid-October before it’s ready as an alpha. Some things may turn out to be simpler to implement than I’m currently estimate. For instance, either in this iteration or the next, I’ll need to write a rules system to allow the game manager to put in everything from prerequisites to conditional dot cost changes. I’m looking forward to designing and implementing that.

And so I keep moving.

So. I LARP. Twice a month, I go out of my house dressed like a nurse and stand around acting like I see ghosts and have an extra-special creepy ghost of my own on my shoulder.

Yeah, so if I’m late to your Saturday afternoon picnic this summer, this is likely why. 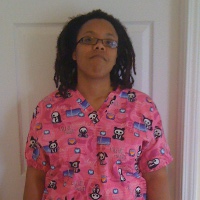 I LARP in White Wolf‘s Geist system, which is very new in the LARP world — the worldwide game just started in March. There’s one person that has taken it upon herself to create and maintain (sorta) Excel character sheets, and the sheets for the Vampire game seem up-to-date and fully functioning. The Geist one isn’t so much, alas.

Instead of mucking with Excel files — which don’t work in OpenOffice or GDocs very well — I’m going to move this whole idea online. The idea’s in architecture/design, but the core idea is simple: a place where people can make, save, and print World of Darkness character sheets. It’s going to be tailored at LARPing in the Camarilla for the moment, including fields for member numbers and such. It’s designed so as to be easy to add other World of Darkness games — those of a certain version adhere to the same formulas, by and large.

The initial release’s functionality is simple, too. Folks create an account in a very slim process — username and password, with a (re)CAPTCHA to cut down on spammage. When you create a character sheet, you pick which game you’re playing. Initally, that’ll be base World of Darkness or Geist.

At this point, you’ll enter the Creation Mode with the standard White Wolf 5/4/3 dots for attributes, 11/7/4 for skills, etc. Once all those dots are used, you move into Edit Mode.

Edit Mode is where complications have to be reduced, because XP needs to be redistributable and every use logged. The purchase of dots should be customizable; maybe your GM ST let you buy that dot at half cost. The XP log needs to be easy to get to and easily edited. If you delete one too many attribute dots, too, you need to end up back in Creation Mode until that dot is spent. Add in custom starting XP and the ability to add custom merits (etc.).

At any time in this process, you can enter character name, your name, your Archetype, Vice, Virtue — all that stuff that would be at the top of a standard character sheet.

Problem is, I don’t have a solid feel on the interface I want. My first thought is to mimic a paper sheet to hide the complexity that’s going on behind the scenes. This is all stuff that players don’t really think about, and I don’t want to force a change in their model. 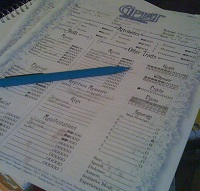 Another approach would be a tabbed interface that split up the “sheet” into major blocks — attributes, skills, powers, etc. Much harder to skim, less flexible in terms of making sidebars useful. Plus, the D & D character building software takes a tabbed approach, and I found pretty annoying. I’m not a normal user, though.

Other than those two options…?