Saturday morning, I roused myself out of bed at a decently early hour and drove Luke, Dr. 7, and myself out to Louisville to see the horses race at Churchill Downs. I didn’t take my camera, alas, or I’d have a slew of awesome photos. The weather vascillated between pouring, sprinkling, and sun shiny, but it all worked out pretty well. The horses were awesome (although small and veiny [in the sense of veins-against-skin]) and the company was good.

Except the company was awkward. Well, I felt awkward. I hadn’t hung around Luke and Dr. 7 for a couple of weeks, and the dynamics are a little different now, as one could expect. It wasn’t until we were back at Luke’s parents’ house that I felt comfortable with them like I usually do, which is just weird and kind of guilt-inducing. By the time Luke’s father was done picking on me, though, I was prying info out of Dr. 7 with my usual persistence (which scared Luke’s brother and mother, I think).

Anyway, since the horse races had been promised to me by Luke (maybe for a missed issue of the paper? Neither Luke nor I remember.), I was allowed to pretty much run the show for the day. We watched a few races from our non-reserved reserved seats and one from the finish line. Luke bet on Dr. 7’s suggestions (which were generally correct) with his own money (Dr. 7 and I are both too stingy frugal for that sort of thing, even though bets were only $2.00).

It was a blast, quite frankly, and it was good to hang out with the guys again.

We ate dinner at Luke’s parents’ house, which was preceded by me driving a riding mower for the very first time! I can now add one more type of vehicle to my arsenal of possible escape vehicles…

Luke’s family was charming per usual, although I wasn’t too terribly fond of being introduced first-hand to the concept of a “wet willy” by Mr. S. Bleh.

Sunday, of course, was the Thorn Banquet. I hadn’t been able to make reservations on Friday at the restaurant we picked, so I drove out to see what the deal was. Turns out it was closed for maintenance on Sunday. Grr. Okay, backup plan was to go to Garfield’s, which I’m a fan of anyway. So I sent out the frantic and apologetic e-mails while Luke tried to calm me down over the things I’d failed to prepare for.

Interesting side story: I’d received an e-mail criticizing the newspaper’s final issue on Friday that I responded to that same afternoon quietly and calmly. I made sure my section heads knew what the score was, particularly those with classes with the person in question (lest there be further hassling). I didn’t think it was that big a deal, honestly. I showed Luke on Sunday, though, and he about blew a gasket in fury. Hell, I wasn’t even going to show Dr. McKnuckleberry, but Luke insisted… It’s just odd when Luke gets seriously pissed and I am significantly calmer about the situation–particularly when it’s criticism, since I tend to internalize these things.

At any rate, the banquet began on time, and the showing was incredible. Everyone that RSVP’ed showed up in good spirits and didn’t even mind my frowny faces about money (although I could kill Sexy Short Stuff for his request for appetizers when we were just talking 30 f’ing minutes before about the money situation). Pictures’ll be up soon (Luke, stop hasslin’ me, punk!), because I got some good ones of people eating or waiting for food.

Luke and Bob did the awards this year, although I helped come up with a couple of them. Mine read: “(Me)Lissa Avery: Biggest, Baddest, Bestest… Brainiest, Beeyatchiest Biznatch Award” with a stick-figure picture of me with hands on my hips and the caption, “Lissa Avery, Badass”. Better yet, here’s a picture: 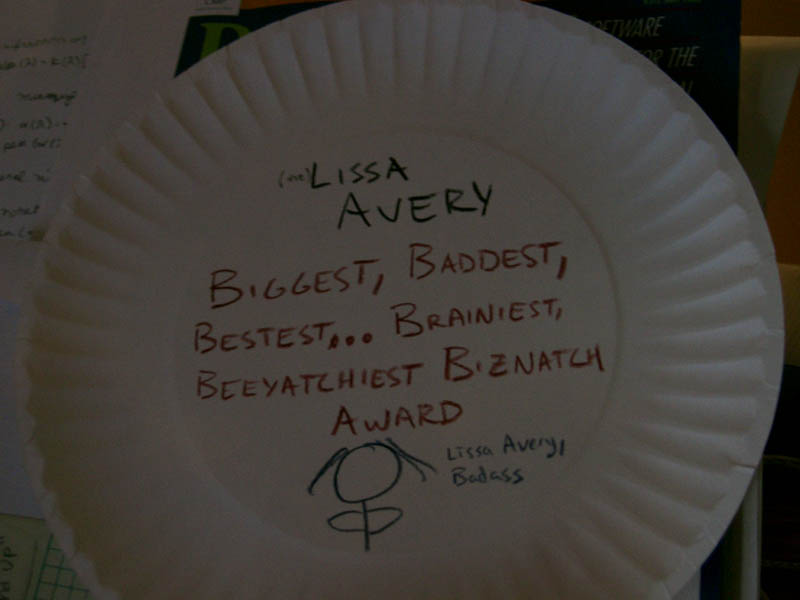 I didn’t have Luke or Bob’s plaques yet, but the awards went over well this year (I’m particularly fond of J.’s “Get out of one bitching free” card and WO’s “Honorary member of the George W. Bush Fan Club”, although the boys did well on all of them.

Dr. McKnuckleberry gave the gift of personally-picked books for all the seniors, which I thought was incredibly awesome.

I managed not to cry, although I think I hugged Bob and Luke about 5 times each and I’ve finagled to see most of the staff tomorrow again anyway under the auspices of packing up the office.

I’m not as sad this year as I was at the end of last year. Part of it, I think, is being much more comfortable with the idea that I have the stamina and resolve to stick with this. I mean, honestly, can next year be too much worse than this year (ignoring my idiocy in overloading first term next year)? I managed to pick up what needed to be picked up by Luke and (less so) Bob’s absences while not failing any classes or suffering much lingering damage from the stress.

I’m going to miss Bob and Luke and Sexy Short Stuff and D. like mad, but…

Yeah. The fact that there’s a “but” is enough.

2 thoughts on “Horsies and banquets”