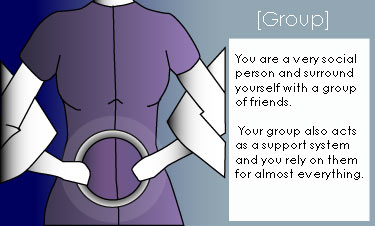 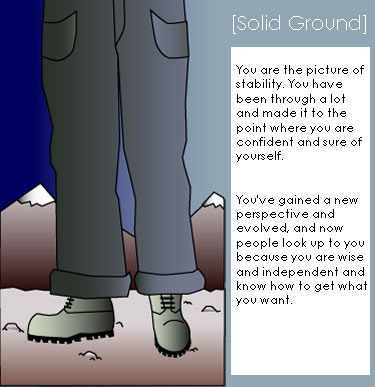 Your World: What is your world made of? [girls]
brought to you by Quizilla

I do have a pair of boots like that, though.

(Quiz courtesy of the mahvelous Jenny. Watch out for that quicksand, girly.)

This hasn’t been in progress nine-weeks of a quarter yet, but I’ve got myself back on a regular workout routine so that I’m back up to four or five days of 3- to 4-mile walks a week (#5). I’m not running yet, in part because I’m still working on keeping the calf muscles loose enough not to reintroduce the foot problem, and in part because I’m not keen on diverting the energy to do any kind of moderately serious rehab/training. I’m more concerned about my loss of lung efficiency and (shallow though it is) all the weight I’ve picked up since Thanksgiving. But I’m back on the road to good physical health.

I’ve also recently acquired a credit card (#21). It’s really for the Thorn and for emergencies, since I’m not keen on paying for Thorn shit immediately out of pocket.

Regarding #42, I’m up to eating several pieces of fruit about four or five days a week. The cafeteria keeps oranges, apples, and bananas stocked, so I usually grab an armful or two every morning at breakfast and pack them away.

More than goals that can be enumerated, though, I’ve met and matched some more internals goals that’re leaving me feeling much, much better and clearer-thinking. I hit enough of a bottom from stress and fatigue a couple of weeks ago that I’ve decided that the only way I’d like to go is up. So I’m going up. Cutting and slashing and rearranging. Well, not so much cutting and slashing, but definitely some trimming and rearranging.

But I’ve learned all about my limitations and my stress-quirks and the way I work and how to optimize that to a fine edge and how to dull that edge. I’d consider this extremely useful information to have, despite the craptacularness of acquiring that knowledge, because it’s changed quite a bit in the past four years.

Several weeks ago, I told Luke that I felt like I’d lost my peace. Like I didn’t feel comfortable or happy in my own skin and in my own mind and in my own life. Since then, slowly but surely, I’m realizing and/or reaffirming what I am and what I want and regaining the strength to just be without some need to impress everyone and their granddaddies. I may fuck up (like the take home test and the interview this week, and, of course, other things other weeks), but it’s my standards that matter, whether mine are lower than others want me to have (at work, for instance, where I recently dropped my position as editor of their newsletter) or higher (in Fundamentals, where I’d like to learn more than *mumblesomething* percent of the material, regardless of the class average).

Self-centered though it seems, it needs to be all about me in some ways where it’s not currently and definitely wasn’t previously.

I am hereby not allowed to sleep on Thursday nights during weeks 3 thru 10 of a term, unless I can get more than 4 hours of sleep that night.

Like my Fundamentals take-home test, which I ran down to the prof at 12:00 (it was supposed to be due at 08:00 if you missed class), unshowered, uncombed, un-anything other than panicked. The test still had 45 points (of a 125 pt test) unanswered, because I just needed to ease the burning in my eyes with a nap… And the test was completely doable. I could have saved my grade. Holy fuck, I could have saved my godamn motherfucking grade.

Or that interview that I was supposed to go to. There are few things quite like calling up the headhunter so interested in having you come out at the time you were supposed to be arriving and telling him that something happened with you and your alarm and that you’re apparently no longer cooperating with each other. There was much stumbling and awkwardness.

I have such a wonderful history with this company. We met, we liked each other, then I turned them down for an internship last summer because I didn’t think I’d be able to have transportation (this was in the fall) to live in Indy. At the career fair in October, I wasn’t able to attend and completely forgot to even reply to the headhunter’s e-mail prodding me to come. Then I went to this most recent career fair showing my true colors: Grumpy Bitch. We arranged for them to keep me fairly high on their list. We later arranged an on-site interview, which I just blew today.

Not a good track record. Mr. Headhunter made noise about them coming down next week anyway, but really, you can’t give a more awkward and fucking irresponsible excuse than “I slept through my alarm clock”. Ugh.

Now, admittedly, the first time I slept through my alarm, there were mitigating circumstances. As in sleeping two to three hours a night and still being stressed about everything. I actually slept decently this week, I’ve forgotten the meaning and feeling of panic that lasts more than ten minutes, and still did that. Very frustrating.

So unless I can get four full hours on a Thursday night (doable, if all my work for Friday is done before Thorn), I’m just not going to bother. This is getting re-fucking-dickulous.

Now, however, I shall write an awesome essay for Latin American studies, beat the shit out of some DISCO, and code like mad for the remainder of the day. Can’t hate on Fridays too much.

Not for the easily offended, I suppose.

Then again, that probably applies to my entire site…

END_OF_DOCUMENT_TOKEN_TO_BE_REPLACED

…I can at least be cheerful and hardworking.

I think someone has been spiking my morning orange juice with happy-crack these past ten or so days. Don’t know what it is, but I’m just glad to be having fun again. Because, really, writing a spreadsheet application in the final four weeks of a term can only be fun if you make it that way.

Okay, self-made fun and a teeny bit of desperation after filling values into that Spreadsheet of DOOM. Fer skerious. Whoo.

(Fun link of the day: Computer Languages History, link courtesy of the I’m-not-going-to-start-in-on-the-suckiness-of-ASP-and-Microsoft-and-the-godliness-of-OpenSource Doup. Yeah, he’s a character. Strangely, he redeems himself about every other conversation, though…