So I practiced driving Danni more after we picked the Rat up from school—and proceeded to scare her shitless. She was convinced that the engine noises (the revving, which sounds all growly for a little four-cylinder) and the jerkiness was due to a serious lack of gas, and pretty much had a panic attack in the back seat, wailing about she wanted to go home, and we needed to go to a gas station, etc., etc.

I almost, almost felt sorry for her. But for rizzle, it wasn’t that damn bad. About half my starts are actually smooth now.

And besides: my car is a growly sexy beast, baby. Grr.

So, after some frustration, some searching, some optimism hopefulness, and some wheeling and dealing…

I have acquired a car. I introduce Danni, a 2002 Hyundai Elantra GLS sedan: 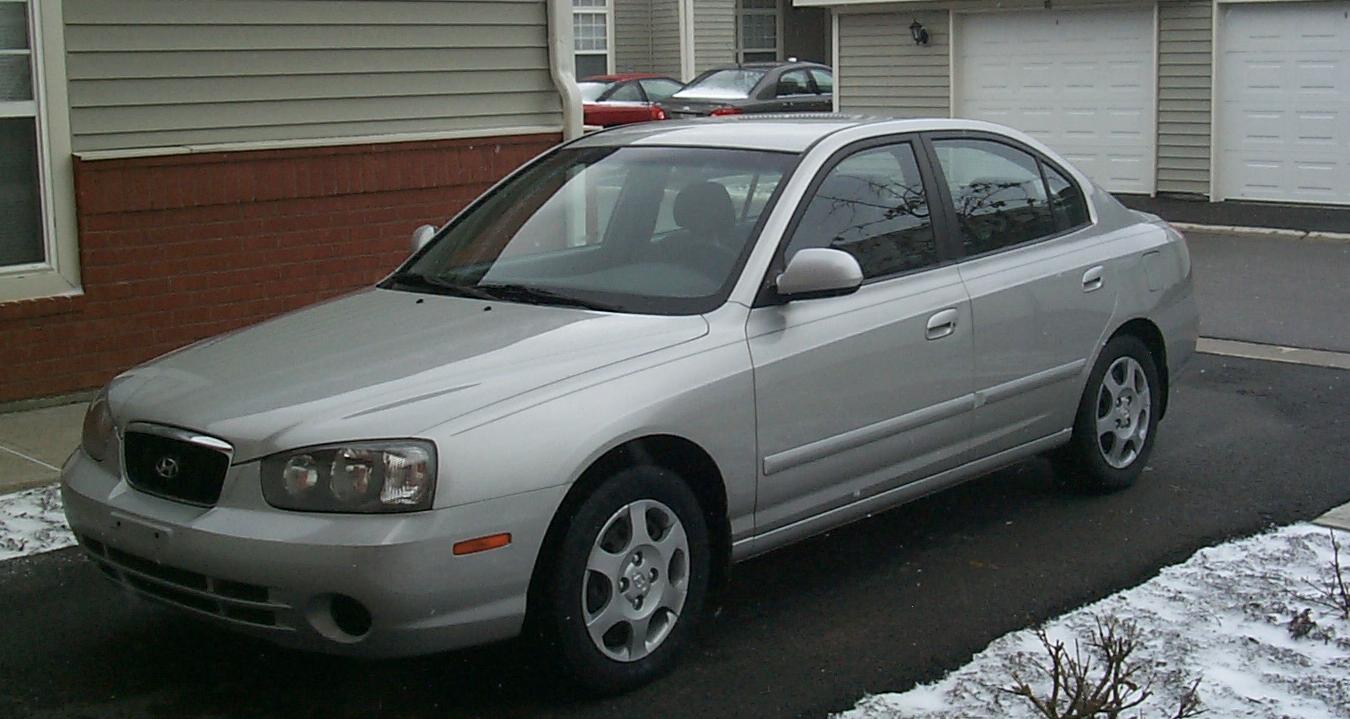 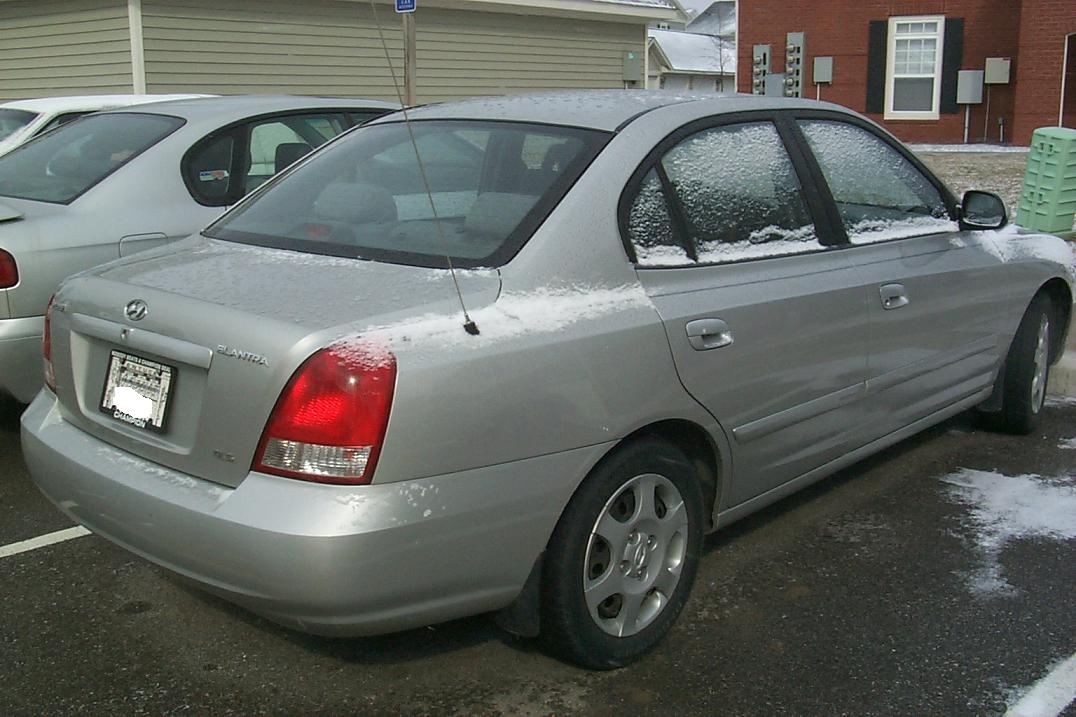 The tale behind the acquisition of this sexy beast? A fascinating one.

I mentioned a while back that my auntie had a sexy Suzuki I wanted to get my hands on. I bugged her about it a little, and she said she’d talk to her husband (who bought it for her) about it. I poked, she dodged. Trusting that she’d tell me if she were going to sell it (but knowing she was emotionally attached to the thing), I went ahead and starting asking around campus and checking in classifieds. I still wasn’t in a rush, particularly, since I only needed a car by summer.

My father became interested in the search and offered to help out (majorly) with funding. He told me he’d also help me try to get Lisa’s car, too, but sent me after classifieds just in case. He managed to get Aunt Lisa’s car. But he kept it.

One can imagine my consternation, although I think I did moderately well to only express it to a few people and to keep up hope that he was serious about helping me get a vehicle.

Which he was. He hadn’t quite sold his Dodge Neon SRT back to the dealer when I arrived, so I began haggling. How much could I pay a month to offset the cost of him keeping the SRT and letting me drive the Suzuki?

That didn’t work, because he really just wanted to get rid of a car payment, and he was paying enough per month for that SRT that I’d have to work all three jobs again just to make the payments, not counting insurance.

However, he was willing to use his car as a trade in (or simply deal in parallel) on another vehicle, one for me. Unfortunately, this means that financing is in their names, rather than mine, but this 2002 Elantra came in that my father jumped on because it is a sweet deal. The deal was made last night and Mother-dear finished signing the papers this morning. Payments are nice and low and doable, and even though insurance is going to be a butt plunger, I can get the first six months’ of payments knocked off immediately, which will keep me from having to pick up the third job again.

One interesting thing, though, is that the car is a stick. Sunday, Mother-dear and I went out in the SRT to attempt to (re)teach me how to drive a stick. That was a long hour of driving, and that car probably hated me by the time I got out. I could not, for the life of me, figure out how to make the damn thing go.

So I was slightly worried about me being able to be a good enough driver of Danni to get my ass back to the Dirrrty Dirty this weekend. I jumped in it, eased up on the clutch while applying gas…

… and the damn thing went. Then I stopped and made it go again. And again. I went from a success ratio of about 1 in 12 on the Neon SRT to about 13 out of 15 in Danni. Now, the hill I tried beat the living shit out of me, no lie, but everything else worked beautifully.

It was hilarious how people would come to their doors and watch, rubbernecking the girl learning to drive a stick. One old man and his dog stood in their doorway for the ten minutes I tried to tackle the hill, just standing there like they had nothing better to do on a Tuesday afternoon on a snowy day. Too funny. I giggled and waved and tried not to pop the clutch again.

So my experiment for this yay-I-have-a-kitchen session was to make an alfredo sauce. Rather than try a traditional recipe that used heavy whipping cream, I modified one that called for cream cheese:

You literally just toss it all in a saucepan and heat it for about twenty minutes. I added broiled chicken and broccoli (and pasta, of course), along with breadsticks, and it came out pretty damn good. It’s a heart-attack in a bowl, though, so the faint of heart need not apply.

Among the other restful bits gained from this vacation (including, potentially, a vehicle…), I am slowly getting comfortable being back on the running boat. I’m having to work hella hard to correct the strength imbalance in my lower legs caused by injury and the limping, but it’s going well.

My current workout is 50-50 walk/run in distance: warmup, run a quarter-mile, walk a quarter-mile, repeat for a half-mile each, repeat for a quarter-mile each, cool down. It’s hard going, and I’m pulling out every calf and shin muscle stretch I can find because my shins tighten up on me during my workouts. But I can already feel an improvement in strength and flexibility, and even this little half-hour is a pretty good workout.

Off days are spent on the stationary bike they’ve got here, which is one of those annoying bikes with the pedals out instead of under, so your legs are almost parallel to the floor. Why so annoying? Because if I don’t relax my back and shoulders just right while I’m pedalling, my lower back muscles take on a little too much strain and cause me trouble for the remainder of the day. So it’s an exercise in relaxation techniques as well as a quad workout. And oh is it a quad workout. Whoo. I (and my knees) love it.

As I was doing twenty [ridiculously long] miles on the bike yesterday, I read the first half of the March issue of Runner’s World magazine. Page. By. Page. Wonderful magazine, and definitely one I plan to subscribe to at some future date. I’d been to the website, of course, and read several of their articles there, but I tend to find their website somewhat annoying to navigate when I’m hunting for something in particular. The magazine itself, though, is an awesome read.

It may be odd to miss certain messages from my body, but there are some things I’ve come to associate with regular hard workouts—and running in particular—that I didn’t notice slipping away until they came back. Like the fact that my hips painlessly (albeit frequently) pop; I hadn’t even noticed when it stopped, but it happened last week one day when I stood up and I went, “Oooh. Long time no see.”

Not out loud, though. That’d just be weird.

But during my run today, I hit one of those little grooves—just a little ways into the half-mile run segment, things just started to flow: breathing in tune, legs feeling fine, arms swinging right. All the little bits that make you feel like you can just go. It was fleeting—I went ahead and stopped at the half-mile mark since I know my leg muscles don’t usually complain until I slow to a walk—but it was a good reminder of what I’m really working for. Yes, I need the cardiovascular health, and yes, I need the weight loss. But more than those, I need that feeling of flying and being free, of having that kind of rapport with my body.

I feel like I’m getting my groove back. About damn time. This winter lasted way too long.

And I am hereby wishing you a 230 Miracle(TM). It’s like a Christmas Miracle(R) except that the role of Kris Kringle is played by Santa Claude [the name of the prof] (because he gives good grades) and the role of lead elf is played by Steve (because he’s short). Anyway, good luck, and don’t let it stress you out too much.

But the 230 Miracle (TM) with Santa Claude tickled me pink. My final grade in that class tickled me pink, too. All the energy investment for 230 cost me heavily in discrete math (which I took the next day), but I’d rather repeat that than repeat 230. Hopefully I did well enough on the math final that I can hold a C in the class.

But the quarter is over, I’m in Cincinatti, and I’m trying to sleep and work off the exhaustion of the past eight or so weeks.

I’m also trying to come up with a good recipe to try while I have a kitchen available to me: I’m thinking alfredo sauce for pasta and breadsticks. Maybe that and a good pesto recipe. I want an excuse to use my chopsticks, dammit!

I’m thinking of how I want to rearrange my room, too. My roommate is departing for Texas this weekend, so I now have two desks, her couch, and more than twice the space that I previously had for my crap. I’m particularly excited about the couch, though (and the use of ceiling lights late at night, so as to reduce the eye-twitchiness). It’s a swingy couch, and it’ll be nice to have a place to sit and read or study that isn’t directly in front of my computer; it should kill off my last bit of distractibility when alone, and will help me move completely out of the Thorn office.

I’m also trying to get some damn wireless to work in Linux, but I can’t get good firmware for the W200 card on my Evo n800w to get the damn thing to turn on. (I have no wired connection in my room, and so rely on hijacking wireless from a neighbor.)

But back to e-mail and recipe searching and grocery store shopping and maybe a little working out (I’m running again, yay!) and a whole lot of reading and working.