I mentioned this obliquely a couple of weeks ago, but I’m wigging out a bit about retirement. In 39 years I will be 65, and I don’t have solid plans with numbers behind them. Socking away $5k a year into an IRA just isn’t enough. 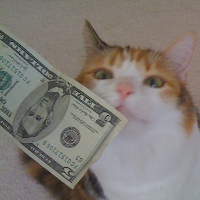 Back in the day, I loved, loved, loved Microsoft Money’s Lifetime Planner. It asked you all sorts of questions about when you were going to have a kid and how much you were saving in various accounts, their expected returns, how much you thought you needed to live on in retirement, etc. Then it crunched the numbers and gave you a big graph showing your projected savings and if you could make your goal.

Since MS Money’s gone the way of the way of the dodo bird, I can’t find an equivalent tool online. None of Mint/Wesabe/YNAB/etc. seem to have this. I’m not buying Quicken. Hell, I can’t even find people talking about missing that feature. Was I the only one who used it?

I want it, so I’m going to make it, but catered to retirement. For instance, I don’t care about the costs of having a baby or buying a house, or simpler calculations of saving for little Booboo’s college. I can do all that math easily in a spreadsheet. I want something tailored to retirement, and tailored to people who change jobs and have life happen to them.

Ferinstance, I want to be able to have the following scenario accounted for: “I currently work for X and contribute 5% of my pre-tax income of $A to my 401k. I expect a 6% return there. In October 2010, those contributions will stop, but I’ll let them sit in that 401k account (rather than roll them over into an IRA) and accumulate that 6% return. Now I work for Y and make $B. I’m contributing 10% of my income to this 401k, and expect a return of 8%…”

If I have a baby, all that should matter — in this case, not the grand scheme of things — is that my monthly contributions may change. It’s no different than changing jobs in that respect.

Is this useful to anyone else? Should this be written as a web service, or as a desktop app? I don’t really want to run anything where I’m storing anyone’s financial information, especially on Dreamhost. I don’t even have a complete initial feature set in mind yet, but I want to throw the idea out there.

The core features I see for this app are:

The “twist” of the app, if you will, is the handling of start and stop dates for contributions to allow for shifting budgets. I don’t want people to feel compelled to futz with things if their contributions change from $450/month to $425, but they should have the freedom to.

What other features would be nice?