This week’s lesson in life is to always, always, always read the fine print of your lease, even when renewing. Straight up rookie move on my part, assuming the renewal terms would be the same as the original lease and not familiarizing myself with North Carolina laws on renter/landlord laws (especially graceful early lease termination).

So we won’t be moving until the house is sold, and I had to argue for an amendment that would let us terminate the lease gracefully when the house is sold, regardless of whether the new owners want us to move out. I’m kicking myself in the teeth today. I feel like a damn idiot. 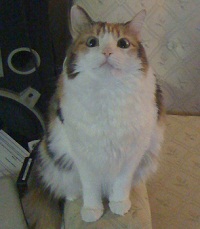 No harm done in the long run, though, and more importantly, I’m not even slowing down on the shrinkage process. I’ve been steadily scanning in documents in the evening between stress-relieving bouts of Left 4 Dead 2. I’m well into the C’s in my file cabinet, and finding all sorts of things to get rid of.

Regardless of Greg‘s scanner being a flatbed, I can’t find a great way to automate the scanning process. Each document needs a descriptive name (usually also dated by original receipt) and to be put in a particular content-relevant folder. Even with a sheet-fed scanner, I’d still only gain the benefit of having multi-page documents only require my attention at the beginning. Good thing is that it encourages me to throw away crap. I don’t have a shredder, but I can do pretty good with hands and scissors.

I need to find something to do with the books, though. The local used bookstore isn’t accepting books for about the next year (‽), and it’s not worth doing individual sales on Amazon, except for maybe the textbooks. The local library takes donations, and they sell the books to raise funds. They’re having a lousy budgetary year, so I might let them make money off them.

Hey, wait. A yard sale might get me somewhere. Money to pay off that student loan (or, you know, that wedding thing I’m supposed to have some day).

I’ll be introducing myself to craigslist to pawn off the desk and filing cabinet once I get a new desk picked out and my documents scanned, and I’m excited. I went and looked at the Ikea desk that Travis mentioned having, and like he said, it seems like the various bars and rails would get annoying. I found a couple more, but I wouldn’t be able to see either in stores.

I’ve been so low-energy this week: fighting off some bug; screwing with this lease thing; living in a dirty, cluttered house (the dirt is fixed, although the clutter isn’t); struggling with social and home drama. I’m tapped. I’ve even bantered around the idea of hiring a temporary personal assistant for the next couple of months. Someone under an NDA to de-paperize the office, make appointments, and help with some of Greg’s “meta” work for Ludus Novus. It’s a nice idea, but impractical.

All the cruft in my space — and the mental space that cruft takes up — is leading me towards something like Dave Bruno’s “100 Items” idea. (Good reading on that includes Mind the Beginner’s thoughts and Zen Habit’s process.) Not necessarily 100, not necessarily following Bruno’s stipulations, not necessarily anything. Just bouncing the idea around.

This isn’t a week for decision-making except where I absolutely must.

One thought on “C is for “clutter””