Instead, she got me and my father. 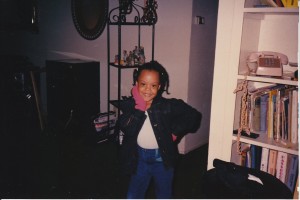 Twice in the last couple of days, I’ve been privy some eye-opening views on families. One of my friends is trying very, very hard to have a baby. She’s struggling, but it’s her goal, and what most of her energy seems to be going towards.

It was fascinating to sit and talk with her about her research on everything from breastfeeding to cloth diapers to her psych class education on child development. She’s a critical thinker who has a sharp eye for analyzing what she sees in other parents/kids and cutting through bullshit.

I love it. Didn’t make me want to have a kid, but I always enjoy being around someone geeking, and I still suffer from wanting to know something about (almost) everything.

Finally, I asked, “Your family seems very… family-oriented. What’s up with that?”

She explained: her mother raised them to be tight. My coworker has five kids herself, and many of her stories are about her own siblings getting married, having (or failing to have) their own kids, etc. Big families, or wanting big families.

I’ve wondered for a while how or if someone would raise a family in a tiny house (300-400 sq. ft.). Ryan Mitchell addressed the question… sorta (in a fairly Ameri-centric way). My coworker touched on it indirectly in describing her own family life.

She doesn’t live in a tiny house, but she is a single mother of five sons in a non-mansion, ranging in age from early 20s to toddler (presumably only the younger four live at home). Even if everyone’s doing something different, they’re in a common area, being around each other. The kids aren’t allowed to hide in their rooms, although they’re certainly allowed solo time for relaxation or studying. They don’t have private computers–there’s a common computer they can use.

The result of this is a family that looks out for each other, even in the troubling and turbulent teen years. They take care of each other, but maintain independence and individuality. They each have activities that are their own without becoming closeted.

Now, I don’t agree with all of her methods–I believe pretty firmly that computer exploration is very, very important. People need to learn how to break and fix things, fairly independently. That might be computers. Might be model airplanes or cars. Might be paint and a canvas or clay. To my computer-oriented thinking, that means a personal computer (at a certain age/maturity) that they have some freedom on.

Anyway, my family was the polar opposite of my coworker’s, especially by the time I was a teenager. I spent entire weekends in my bedroom absorbed in books–I could read 2-3 novels cover to cover in a weekend by the time I was 16–and coming out to eat or bathe at odd hours in order to avoid my parents. I feel like we spent most of our time in separate rooms. I don’t share things easily (money, food… patience). I’m very secretive in some areas. My much, much younger sister’s birth (when I was a 14 year-old only child) was a dramatically terrible blight upon my existence.

These days, I keep up with Greg’s parents more than my own. I don’t know what my older brother is doing with his life other than that he’s very religious (and so was limited in his communication abilities with me, last we spoke). My older sister and I are getting back in touch.

All that envy aside, I don’t want to talk to family every day if they aren’t living with me. Probably not even the same person every week. I don’t even really want to reach out to the people I’m more actively estranged from. But if I were to raise a family, I don’t think I’d let the situation I was in as a kid develop. That’s not to unfairly blame my parents or make it sound easy–they had a very complicated situation themselves, and I’m a a well-taught introvert.

Most elements of my coworker’s family sound healthier and happier than mine, though, so I’d borrow from that. My friend’s enthusiasm, research, and knowledge absorption mean that she’s going to be great at trying different options and experimenting until she and her future kid are happy. She doesn’t feel like she already knows everything, but has the know-how to think critically about the choices she’s considering. That’s admirable.